We have some information from the Campagnolo launch of the new groupset called Potenza, it is a mid-range 11-speed road group designed to compete head to head with Shimano’s Ultegra

In Campagnolo’s line-up, Potenza sits below Super Record, Record, and Chorus. Those three groups are offered in both EPS electronic shift, or mechanical shift: Potenza, for now, is only offered in mechanical.

Potenza’s root features and technologies are trickled down from the company’s more expensive groupsets. Potenza incorporates the latest updates to Campagnolo’s high-end groupsets and the Potenza is fully cross-compatible with them as well.

As far as its mission to compete against Shimano’s Ultegra, Potenza bests Ultegra on weight by about 87 grams

New Group?
Though Campagnolo had an existing mid-range 11-speed group, Athena, the decision was made to create a new group, rather than redesign an existing one.

My interpretation is that the company wants to try to get in on the action in the OE market and take some share away from Shimano and SRAM—a daunting task.

Also, the company is trying to convince cyclists that it is more than just a very high-end drivetrain manufacturer; that it can make a competitive mid-range group that you will want on your next bike—also a daunting task. This represents a significant new push from Campagnolo; one that they feel means something more than a redesign of an existing group. Potenza has similarities to Athena, so it may be semantics, but Campagnolo seems to believe Potenza is the start of something new. 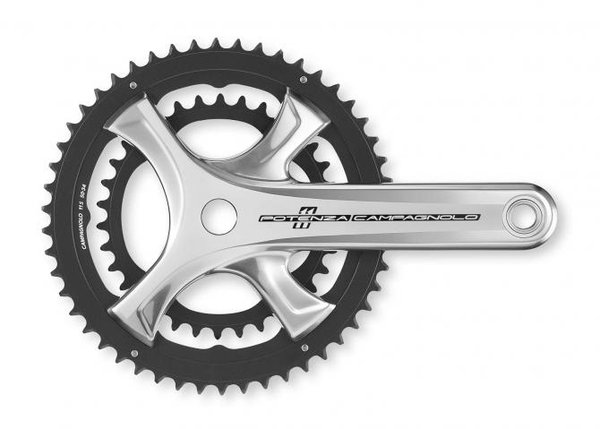 Potenza Tech
Though there are similarities to Athena, Potenza inherits the updated features from Campagnolo’s higher-end groups like a four-arm crank and derailleurs. Two colours will be offered: black, and polished.

Potenza is offered in all black, or polished with black accents.PHOTOGRAPH COURTESY OF CAMPAGNOLO

The only real functional difference between Potenza and Super Record is the rear shifting.

Potenza’s ErgoPower levers use an aluminum brake lever with reinforced polymer shift levers and hoods. The brake levers, and shift paddles directly behind, are the same shape as Super Record, etc. The thumb triggers, however, drop lower (a design influenced by EPS), making them easier to reach from the drops. Inside is a new and more durable PowerShift mechanism.

The hood shape is an updated version of the tall-peak design that debuted with Super Record 11-speed. Potenza’s peaks are more rounded, and Campagnolo expects riders will grip them for an additional riding position. The shape of the bar interface has been updated for improved fit with compact drop bars. The hood covers are revised to improve water drainage, says Riddle. 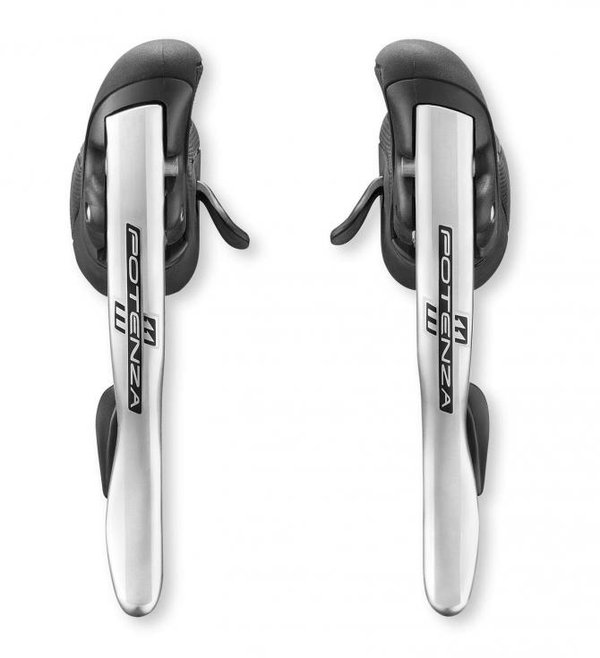 The brake calipers use Campagnolo’s familiar Skeleton design. The only real news here is a new pad compound. This is a huge upgrade—improved feel, more power, better modulation. Hopefully, the compound will be moved up the line to the higher-end groups.

The rear derailleur is largely the same as Super Record/Record/Chorus, but made of less expensive materials. Like the higher end groups, Potenza uses Campags EMBRACE system, which keeps the chain closer to the cassette, and wraps the chain further around the cassette. These details, provide improved shifting performance, and more security on bumpy roads. Potenza does have one feature the higher-end derailleurs do not: repositioned limit screws that are easier to access. A short cage and a mid cage are offered.
Soma is considered as a miorelaxant. The main action of this medication is to prevent the transmission of the nerve impulses to the brain. For additional information, go to https://manhattanvalleypediatrics.com/buy-soma/ . For this reason, Soma is intendedmainly for the relief of muscle pain and injuries.

Formed in the summer of 2000, Bigpeaks moved into this modern out of town Superstore in April 2001. 15 years later the Bigpeaks Bike Shop and Watersports Store is well known and respected in the area. Bigpeaks aims to offer a quality shopping experience where great bike and watersports products from around the world are merchandised and sold by enthusiastic, friendly and knowledgeable people.

How to find us

We are open for Business as usual

We are open between TUESDAY-SATURDAY 9.00- 5.30 during this period of Covid 19 and closed SUNDAY & MONDAY.

We have great Social Distancing Measures in Place which will keep us all safe.

We currently have good stocks of superb E-Bikes too and a few at great prices!

**Due to the increased demand for servicing of customer bikes, we currently have a backlog of 2 weeks. We are continuing to work with our customers to reduce this but in the meantime, we apologise in advance for any inconvenience and appreciate your understanding**